After their arrival at the Samboja Lestari rehabilitation centre in East Kalimantan, the orangutan Jubaedah and her 2-year-old offspring Jubaedi are doing well, all things considering. But the mother’s health is still far from good.

25 kg. That was all the 20-year-old orangutan Jubaedah weighed when recently she and her offspring Jubaedi were rescued and brought to Samboja Lestari.

The rescue of this couple is the most recent for BOS Foundation. The rescue mission was performed in cooperation with Bontang Natural Resource Conservation Agency (BKSDA).

Six bullets to the body

Jubaedah and Jubaedi were in very poor condition when they were found in a village. Especially the mother was severely afflicted. The veterinarians quickly found that Jubaedah was severely malnourished, weighing only 25 kg. The standard weight for an orangutan her age is above 40 kg.

The rescue team also found cuts and wounds from sharp objects in her head and on her right index finger. She had also lost a finger on the same hand.

More examinations were performed back at the rehabilitation centre. Six bullets were found in Jubaedah; in her cheek, chest, armpits, and in both her legs. The veterinarians suspect that a human-orangutan conflict resulted in the bullets. Fortunately, the 2-year-old Jubaedi dodged the bullets and her health was generally stable, all things considering. 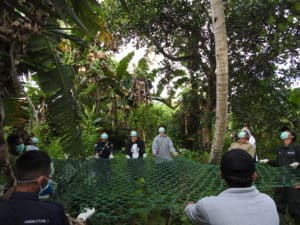 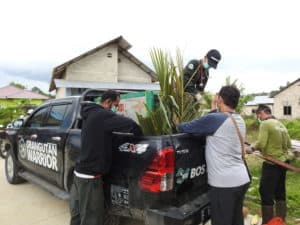 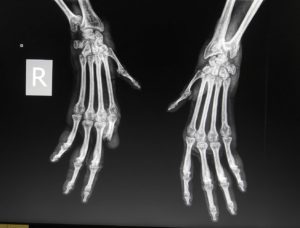 The two orangutans are still cared for at the rehabilitation centre in East Kalimantan. Recent examinations show that the mother is getting better. She is gaining weight and her wounds are healing slowly but surely. However, Jubaedah’s health is far from good, and she needs more recovery time. Besides wounds and bullet wounds, she was also severely dehydrated and suffered from anaemia and low blood sugar.

Fortunately, both mother and offspring have hearty appetites, according to the technicians at Samboja Lestari. However, they are still quite nervous about the new human contact. Jubaedi’s condition has also improved and she eats all fruits and leaves served to her.

Although the weight gain is a positive marker of the mother’s recovery, her health is still far from optimal. Jubaedah’s condition was also the reason why the couple could not be immediately reintroduced to the rainforest. Instead, they remain at Samboja Lestari while they receive the necessary care and nurture.

Following the rescue, the rescue team from the rehabilitation centre named the two orangutans.