The indigenous people of the Dayak Wehea tribe in the Indonesian part of Borneo (Kalimantan), are experiencing increased marginalization as they are losing the rights to their land. A new project has been developed with the goal of strengthening their cultural heritage and community of value and in this way also increasing their capacity to advocate for recognition of rights as indigenous people.

The Dayak Wehea people reside in and around Borneo’s rainforest. The tribe has for generations lived in harmony with nature and used the forest in a sustainable way. Their situation has, however, changed over the years. The industrial development and the tribe’s lack of rights has led to forest areas being conversed to plantations. This development has threatened the tribe’s traditional way of life.

For this reason, Save the Orangutan has initiated a project together with local partner organization BOSF-RHO and six Dayak-Wehea villages in East Kalimantan to strengthen the common cultural values of the tribe.

The hope is to improve the position of the tribe in the process of achieving rights to their land – both for their sake as well as for the sake of the rainforest. The aim is also to make them understand the great value that their special knowledge and common traditions have.

“Without a culture, you have no identity. We want them to be proud of being Dayak Wehea,” says Aldrianto Priadjati, project manager at BOSF-RHO.

This project is the third phase of a major project funded by the Danish Civil Society in Development (CISU) and was initiated on July 1st 2019. Representatives from Save the Orangutan made a project visit during fall 2019 and together with BOSF-RHO they conducted a series of interviews with the residents of the Dayak Wehea villages.

Culture right from the heart

The Dayak Wehea tribe is one of several hundred sub-ethnic tribes living in Kalimantan. For many generations the tribe has held on to ancient traditions which even today serves as a reason for gathering families and villages. This includes the rice festival Lom Plai which brings the tribe together every year to celebrate the harvest.

“The special thing about this project is that it focuses on their culture. It comes directly from their hearts. Culture is not something many organizations work with,” Aldrianto Priadjati explains.

When Project Officer Ditlev Damhus from Save the Orangutan visited the villages, the residents seemed very happy with the fact that people from the outside showed interest in their culture:

“They can talk for hours about rituals, languages, dances and other details about their cultural traditions. I generally experienced great enthusiasm towards the project and the importance of focusing on their culture was confirmed,” says Ditlev Damhus.

The project will emphasize everything that makes the Dayak Wehea tribe unique. Dance competitions and workshops in traditional crafts will be arranged. Additionally, a dictionary will be created in order to help maintain the distinctive language of the tribe which is otherwise only passed on orally. 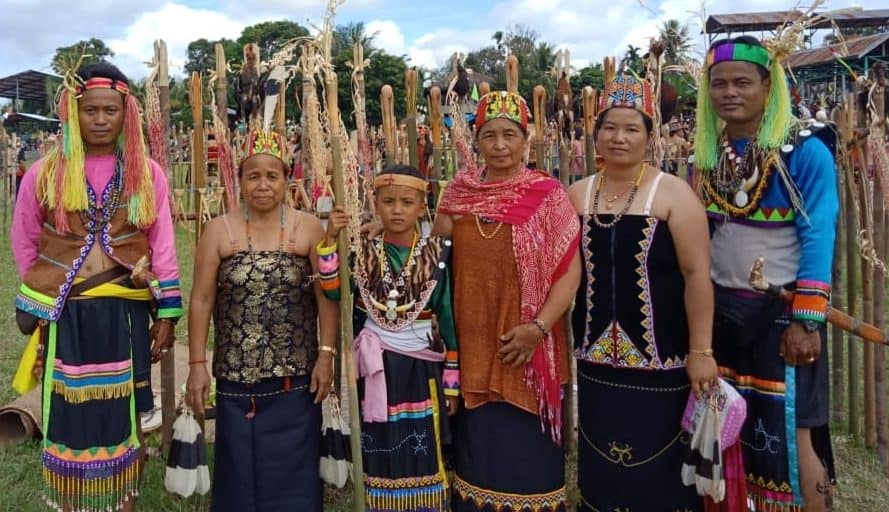 Development affecting both nature and culture

The Dayak Wehea culture is closely linked to nature. They use the land for cultivation and in the forest, they find food and materials for tools, crafts and much more. There is a basic respect and understanding for the rainforest as they have always lived side-by-side with it.

The modern world does not, however, leave much room for this traditional way of life.

The rapid industrial development has led to companies and plantations taking over the forest. Plantations can be used for 25 years – after which the soil is left unproductive and barren.

Instead of cultivating the land themselves, many from the Dayak Wehea tribe now work on the oil palm plantations. It keeps them out of poverty, but at the same time it causes immense damage to nature that otherwise plays such an important role in the traditional culture of the Dayak Wehea people.

“They need to adapt to the extremely rapid development we are seeing. But there is no time to think about whether it really is a good idea,” Aldrianto Priadjati explains. He believes the tribe’s vision of sustainability for themselves and the rainforest has disappeared along the way:

“The long-term perspective was part of the original Dayak Wehea mindset but is now getting lost. We want to give them back their own knowledge and remind them of who they are. It’s not about preventing development, but rather about remembering who you are,” says Aldrianto Priadjati.

The tribe’s rights contribute to preserving the rainforest

The preservation of a culture is not only important in terms of identity. The project is part of the Dayak Wehea people’s overall fight for their rights in order to move them out of marginalization as well as to contribute to the preservation of the rainforest. The Dayak Wehea tribe has currently not been officially recognized as an independent sub-ethnic group. Recognition can be of great importance in gaining the rights to the land which is absolutely essential for maintaining their culture and traditions.

A stronger community and greater public knowledge about indigenous people provide a better basis for advocating for their recognition.

“By obtaining rights, the identity and opportunities of the Dayak Wehea tribe are strengthened. Especially, it enables them to oppose industrial interests and continue with managing nature sustainably, as they have for thousands of years. We support them in the fight for their rights because we believe they have the right to the land. At the same time, it is a valuable way to preserve the forest,” says Ditlev Damhus from Save the Orangutan.

Recognition of the Dayak Wehea tribe will, therefore, be a great victory for people and nature alike.

News about Alba the albino orangutan