Many unique species, such as the orangutan, can be found in Borneo’s magnificent rainforests. But the tropical rainforests around the world are not only home to thousands of species – they also have many important traits that are lost if the rainforests disappear.

Here we take a look at a number of reasons why the rainforests are so important. Many great arguments for why the destructive deforestation that we see in large parts of the world needs to stop.

Read more about how Save the Orangutan protects and replants rainforest areas in Borneo here.

1 . Thousands of species of animals and plants in the rainforest 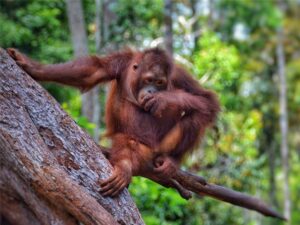 When biodiversity is threatened, ecosystems are threatened as well. Each species has its own role in an ecosystem, and it is difficult to know when the loss of a species will cause irreparable damage. The orangutan, for instance, contributes by spreading seeds for new plants to grow. They break branches and twigs to build their nests which helps the sunlight reach plants on the forest floor.

2 . The rainforests contribute to the battle against climate change

It is not just red meat and transatlantic flights that are the culprits of climate change. One of the main causes of climate change is deforestation. Up to 20% of human-caused CO2 emissions are due to deforestation, clearing and burning. Carbon is stored in trees and plants, but when forests are destroyed it is released as CO2. The peatland forests, of which one third are found in Indonesia, release far more CO2 than any other type of forest. Therefore, the clearing of Borneo’s rainforests has a global impact.

Save the Orangutan protects the large peatland forests of ​​Mawas in Borneo, which you can read more about here.

When the rainforests are protected, the absorbing and storing of carbon plays an important part in stabilising the climate.

3 . Forests are of great importance for water cycles

Rainforest areas contribute to the formation of rain clouds through the process of transpiration. In this way, the forests generate a large part of their own rainfall. Additionally, some of the moisture from the rainforests travel several thousand kilometres contributing to rainfall worldwide. The rainforests thus affect water cycles and regulates the climate worldwide. Deforestation, however, leads to a negative impact on global water cycles, with consequences such as drought and challenging conditions for food production worldwide.

Rainforests are often referred to as the ‘lungs of the planet’. Although the concept can be a bit misleading, it refers to another one of the rainforests very important traits – providing clean air. Through the process of photosynthesis, trees and plants absorb CO2 and release oxygen that we need to breathe. Simply put, the rainforests can be seen as natural air filters, which is also the reason why the air feels particularly clean in forests.

5 . Local communities depend on the forest 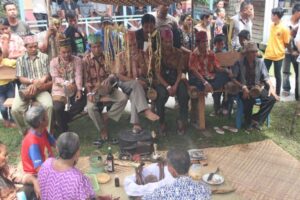 Millions of people around the world are highly dependent on the rainforest and its resources. Indigenous peoples and other forest communities have for many generations lived in and close by the forests that they use as sources of income, as well as for food and materials in their everyday lives. Many of these communities are forced away from the areas when forests are cleared for plantations, which often lead to poverty. For many indigenous communities, their rights to the land have not been recognised – which has consequences for both the management of the rainforest as well as for the communities.

6 . Medicine derived from the rainforest

Rainforests contain large amounts of treasures. Both in terms of plants, trees, and animals, as well the healing effects of many medicinal plants. For many years, plants from the rainforest have been the base of medicines we humans use around the world.

However, only a small part of the forests have been explored and deep in the forests lie many more secrets hidden.

7 . We cannot bring back species we have lost

The rainforests should not only be saved for us humans. The rainforests are unique ecosystems, with lives of their own that we humans must not destroy. Once an endangered species of plants or animals disappear, we cannot bring them back. Therefore, we must take care of the earth’s rainforests for future generations.

Support our work for the orangutans and the rainforest here.

The first day in the wild for the released orangutans

We use cookies to ensure that we give you the best experience on our website. If you continue to use this site we will assume that you are happy with it.OkPrivacy policy